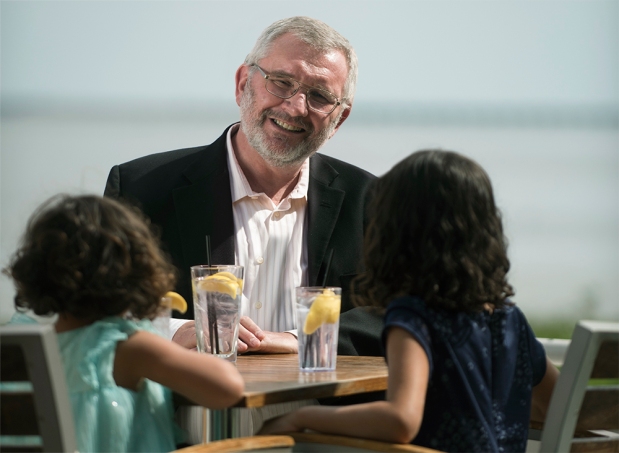 This blog was adapted from its original article on Hear and Now, a Cochlear Americas recipient blog. Read it here.

Sometimes life takes an unexpected turn and we find our “status quo” has been uprooted. When things are not going according to plan, it can be easy to feel lost.

But that does not mean it is the end. In fact, it may be a new beginning.

Meet Dennis, a Baha® 5 SuperPower recipient. He had normal hearing until 2012, when he went to the doctor because he suspected he had swimmer’s ear or inflammation.

Instead, Dennis was diagnosed with an acoustic neuroma— a rare, non-cancerous tumor that presses on the eighth cranial nerve leading from the brain to the inner ear. Common symptoms include hearing loss, tinnitus and vertigo.

Doctors estimated that his tumor had been growing for about 20 years.

“As the tumor grows, it takes up space, and by the time we found it, my hearing was down to 30 percent in the right ear—nothing usable,” Dennis said. “I could hear pings and single tones, (but) I could not understand what people were saying.”

Doctors told him his treatment options were surgery or radiation. Dennis opted for surgery in April 2013 to make sure the tumor was completely removed.

Six months later, at a post-surgery follow-up with his ENT, Dennis first learned about the Baha System. That was when everything changed.

“As a test, he put a Baha [sound processor] on my head, on a metal band,” Dennis recalled. “He stood behind me five feet or so and whispered words. When I realized it was picking up the sounds I was missing, I realised I’d like to have something to ‘harvest the sound’ from the deaf side.”

He had abutment surgery in December 2013, and by February 2014 Dennis was fitted with the BP110 processor. He said it helped him to become more aware of his surroundings.

“People couldn’t sneak up beside me on my right side, and I was aware somebody was there. That was basically why I did it,” Dennis said.

In March 2017, he upgraded to the Baha 5 SuperPower. Denn

is said one of his favorite features is the rechargeable batteries.

Reflecting on his journey and his advice for others, Dennis compared hearing loss to navigating in the dark. It’s a lot easier when you have a light.

“Light a candle, don’t blame the darkness,” he said. “What do you have to lose?”

For more information on the Baha 5 SuperPower, click here. To find a hearing specialist near you, click here.

Want to share your story, hearing tips or Baha advice with The Baha Blog? Let us know! Find us on Twitter at @TheBahaBlog, on Facebook at our page The Baha Blog or via email at bahablog@cochlear.com.

First released only months ago, the new Baha SoundArc is already beginning to improve hearing experience for some Baha users. For one 82-year-old user in Belgium, the SoundArc proved to be an innovative solution to the daily discomfort of an outdated steel headband.

The patient, John (not his real name), was not able to receive a Baha implant, so he instead wore his Baha Cordelle II on a steel headband. The headband became uncomfortable, painful and even created pressure wounds on his head, so he rarely wore his sound processor and instead lived with his hearing loss most of the time. His audiologist even worked together with an orthopaedic technician to modify the headband and adapt it, but still the discomfort was too much for him.

When John upgraded his sound processor to a Baha 5 SuperPower in 2017, he was already able to hear a great improvement in speech understanding. Still, he had this uncomfortable headband that kept him from wearing his sound processor much of the time and improving his day-to-day hearing experience. 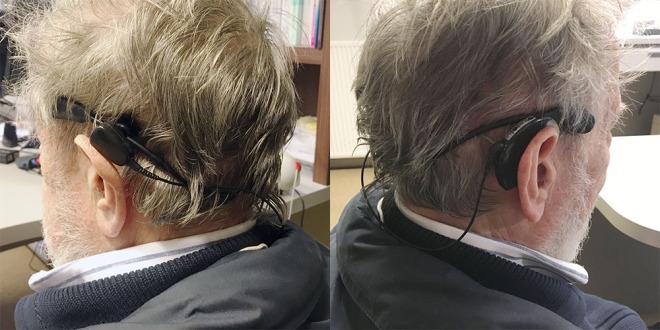 A patient wears a Baha 5 SuperPower sound processor on a SoundArc.

The turning point came in November of 2017, when the audiologist was able to offer John the new SoundArc and attach to it his Baha 5 SuperPower. Easier on the skin and the eyes, he said it was both profoundly more comfortable and much more attractive than his old steel headband.

The audiologist, very happy with the new solution, said, “This is a textbook example of how a Baha sound processor fitting should be!” John hopes to get adjusted to wearing his Baha 5 SuperPower for longer periods of time now that he has a creative and comfortable solution.

Want to share your story, hearing tips or Baha advice with The Baha Blog? Let us know! Find us on Twitter at @TheBahaBlog, on Facebook at our page The Baha Blog or via email at bahablog@cochlear.com. 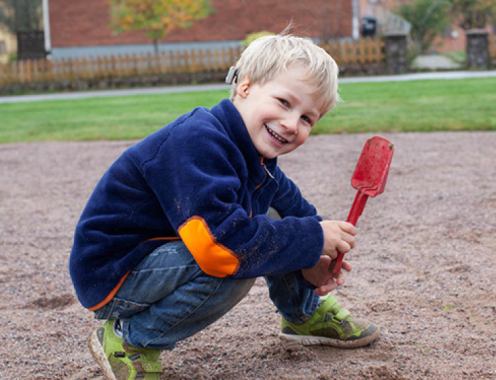 Kids love to play, run and be active, and the Baha sound processor shouldn’t be a hindrance. On the contrary, it’s a natural part of your child’s life, helping them to hear, learn and communicate. 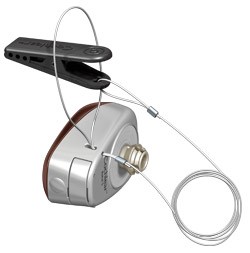 The Baha Safety Line is an indispensable accessory for active children! While a number of studies of the Baha Attract System show that the SP Magnet has extremely good retention – as it is designed to firmly remain on when running, going up and down stairs or during exercise routines – we recommend always using a safety line for extra security. The little tool both prevents the sound processor from hitting the ground should it come loose, and helps children to easily put it back on themselves.

Insert the line into the attachment point and fasten it to your clothing as shown below. 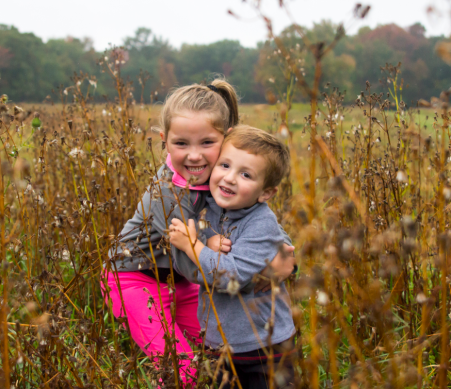 Are you a parent or caregiver to a child with a Baha 5 System? Here are some tips on how to handle the battery door in your child’s sound processor!

All Baha 5 sound processors are equipped with tamper-proof features to prevent accidents from happening. Batteries, for instance can be very harmful if swallowed. You can rest assured that Cochlear has taken great measures to prevent your child from being able to open the Baha sound processor and taking out the battery.

It’s very important however that you check the sound processor on a daily basis to make sure that everything is working correctly. 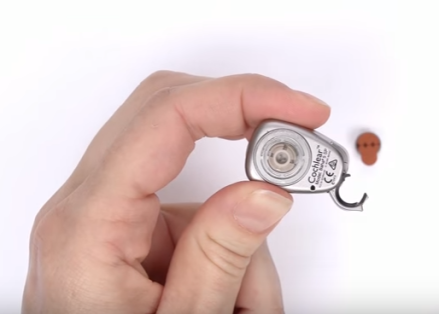 You must feel two clicks when you close it – if not, you should replace the door immediately. If the little “pin” (circled in red) is broken, the tamper-proof door won’t function as designed, and there is a risk your

Tip: Make it a habit that every time you change the sound processor battery or start the device, to make sure the door is firmly locked by lightly trying to open it – to test that the tamper-proof is functioning.

See also: How to change the battery in the Baha 5 Sound Processor 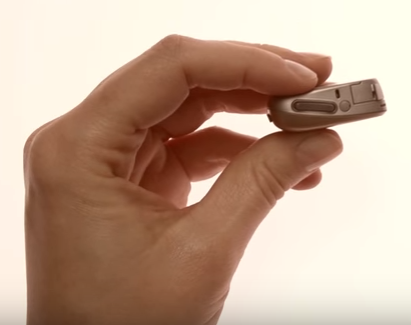 The Baha 5 Power and the Baha 5 SuperPower sound processors have a built-in locking mechanism in their battery doors. You lock and unlock it using the tamper-proof tool provided in the sound processor box.

Should the battery door break, you can change it yourself, like this.

See also: How to change and charge the battery in Baha 5 SuperPower

If your child still somehow should manage to swallow a battery, contact your hospital emergency department immediately. Don’t try to make him or her throw up, and avoid food and drink.

Not sure? Warning signs that a child has swallowed a battery include: excess dribbling, trouble swallowing, vomiting, coughing, choking, and unexplained chest infection. 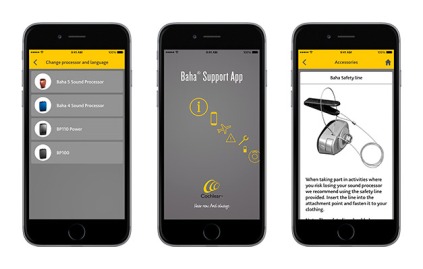 Psst: Download the Baha Support App to keep all instructional videos and tips in your smartphone!

How sweet is this?

Baha 5 user Marisa from Mallorca, Spain, shared these cute marzipan sweets in the shape of a Baha 5 SuperPower and a Baha 5 Power, with our Spanish friends.

Something to start practicing on for the holidays? 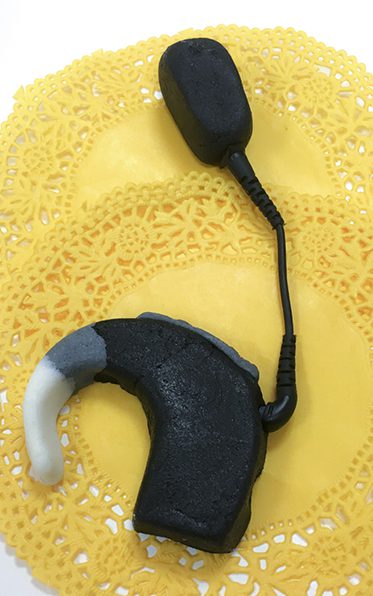 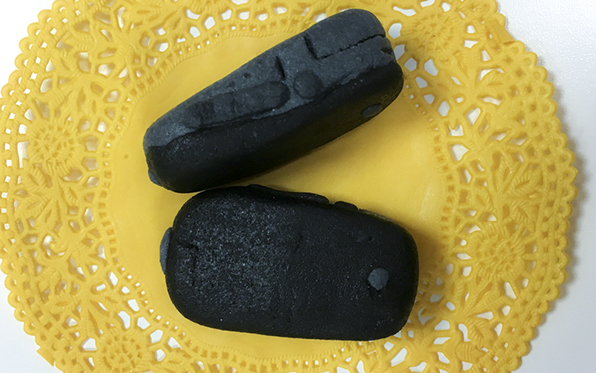 Question: I upgraded my Baha device to a Baha 5 SuperPower and am, for the most part, happy with the results. However, I am having feedback issues due to the close distance of the abutment to the sound processor. Do you ever recommend moving the abutment? // Rock

In some cases, people who upgrade to the Baha 5 SuperPower may find there is limited space between the abutment and the ear which could increase the risk for feedback. With this in mind, Cochlear created a flexible wearing system that allows you to wear the sound processor under the ear. We have developed a special ear hook to support this and have so far noted good results with this option.

Instead of moving the abutment, I recommend that you contact your hearing care professional to evaluate if wearing your sound processor under the ear instead of behind the ear could be a way to overcome the feedback.

Ears are the newest trendy body part – at least according to New York Fashion Week! No news for us, right 🙂

We love seeing pictures of creative Baha users and how you decorate your sound processors. Some people even get tattoos to highlight their hearing loss or to sympathise with a loved one (although you certainly don’t need to go that far!). The picture of the dad from New Zealand who tattooed a cochlear implant just like his daughter’s went viral last year, and we’re sure there are lots of other creative ways of highlighting your hearing loss or blinging your sound processor.

Here are some ideas we’ve come across. Feel free to share your own – either here or on our Facebook page. We’d love to see how you decorate your or your child’s Baha sound processor! 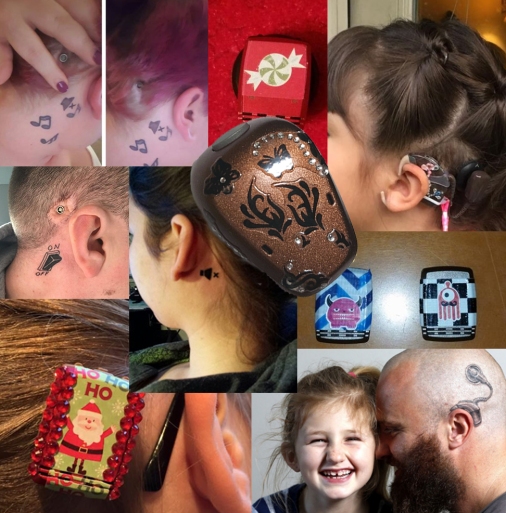 Please be aware that material in certain stickers and glue may contain substances that are not biocompatible and thus may cause skin reactions. Test it on your skin first!

Connect with Cochlear in social media

The Baha® Blog is written by the team at Cochlear Bone Anchored Solutions AB (Cochlear)|Opinions expressed in the Twitter feed and in any related comments reflect the personal opinions of the original authors, not those of Cochlear|The Baha® Blog and Cochlear are not responsible for the content or opinions expressed in external sites |In the United States and Canada, the placement of a bone-anchored implant is contraindicated in children below the age of 5|Please note that not all products mentioned are available in all countries